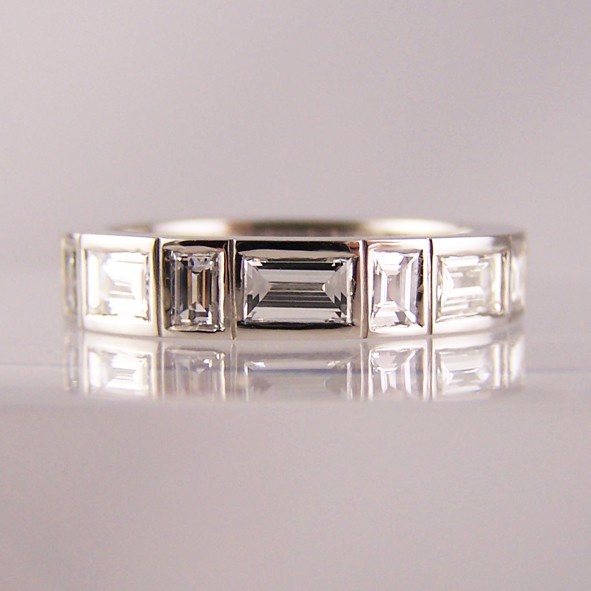 The History of Eternity Rings

What better way to celebrate a year of marriage or your first child together than by giving your loved one an eternity ring? Today, eternity rings are some of the most sought-after items in a jeweller’s catalogue. They may not have always been referred to as “eternity rings,” but they have been around for thousands of years.

Back to Ancient Times

The first eternity rings were likely exchanged by the ancient Sumerians in the city of Ur as early as the 4th millennium BC. They were also used in Egypt around the 2nd millennium BC. In both cultures, they were symbols of eternal, undying love.

Early eternity rings were likely made from plant materials such as reeds or hemp and, later on, from iron. Plaited, multi-stranded, and twined rings have been used as eternity rings across cultures. However, for many centuries, rings made from gold and silver were beyond the reach of most people, being restricted to the fingers of the very rich.

The Romans used what can be considered the modern precursors to the eternity ring. Roman men gave their wives gold or iron rings as a token of love and affection. Eternity rings may have also evolved out of keeper rings—single or paired bands worn above and below a wedding ring to protect it.

It was not until the 18th century that the eternity ring was associated with marriage and acquired the symbolism and form for which it is known today.

In the 18th century, men of good standing began to give women eternity rings, often as tokens of affection, though not always to mark an anniversary. However, at the time, eternity rings were not necessarily endowed with the continuous row of gemstones for which they are known today. Gemstones were not only expensive, but prone to loss, and the design by which the ring is known today would have likely seemed extravagant.

The 19th century saw the emergence of eternity rings using coloured stones, and later, of diamond eternity rings. In the early 20th century, popular eternity ring stones included emeralds, red and blue rubies, and sapphires. It was also around this time that platinum eternity rings began to catch people’s fancy. But it wasn’t until after the Second World War that diamonds became closely associated with eternity rings.

While modern eternity rings come in a variety of styles, including the half-eternity ring, with stones set only partially around the shank of the band, most feature an uninterrupted string of diamonds or gemstones cut in the same style running around a band of gold, platinum, or silver. It’s a striking look that makes modern eternity rings easy to recognize.

Even when jewellers experiment with nonconventional materials or create bespoke rings, they draw on the circular run-of-stones design to differentiate this type of ring from wedding or engagement rings, which tend to feature a fixed setting in one form or another.

Traditionally, eternity rings are given by men to their wives as a token of appreciation, to mark a decade of their marriage, or celebrate the birth of a child. However, in our day, eternity rings serve a more versatile purpose. They are used to celebrate important occasions and may be given not only to spouses but to family members or friends. They are sometimes used as promise rings and celebration rings. Many women today continue to wear eternity rings stacked with their wedding and engagement rings.

Whatever the occasion, eternity rings carry on a long tradition and can make a wonderful impression. Their distinctive look and versatility will likely ensure that their history will continue for many generations to come.