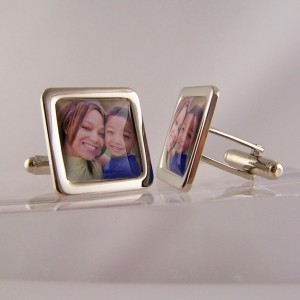 At RING jewellers as  well as making bespoke diamond engagement rings, wedding rings & commitment bands we also make a range of bespoke cufflinks. Because the initial stage of making them is photographic, the customer can have literally anything at all as the subject matter. As ‘anything’ is quite a big choice people are often a little daunted as to what to choose. The stories behind clients eventual choice are often quite entertaining & can act as inspiration for other people’s choice of design…..

In the pink. As well as Christmas & birthday gifts RING jewellers bespoke picture cufflinks are often purchased as wedding gifts for ushers. One set of usher’s cufflinks I made were very amusing. The groom came up with the idea of using pictures of his friends (who were to be ushers on his big day) extremelydrunk on his stage doo. What made the photos so funny were that the guys were in fancy dress! The pink panther had more of a stagger than a swagger. Spiderman could only climb the height of 1/2 a lamppost & as for Superman, well he didn’t look too super!

The new addition. As technology move on pregnancy scans are becoming incredibly clear. So clear in fact that a few of our customers have used them for our bespoke cufflinks. What better gift for a dad-to-be.

Broom, broom baby! A bit cruel this one. A friend of a customer was the proud owner of a shiny red Ferrari. As the gentlemen was about to become a dad & was settling down into family life he reluctantly had to sell his Ferrari in order to buy a more sensible ‘family’ car. Our customer decided to remind him of this fact (whilst sniggering as he ordered) by commissioning a pair of cufflinks for him with a photo of his beloved Ferrari on one cufflink & his new Fiat on the other! I never did find out if they were well received! United Nations. A customer of ours from the UK was marrying an American lady. In their family the UK/US rivalry was never too far away. It was a standing joke in the family that they often tried to better each other with stories of which nation was better. The groom decided to surprise his bride by commissioning this design to wear on his big day:

Love this place. One lady commissioned a pair of cufflinks as an anniversary gift for her husband. Bearing in mind the special occasion she came up with a really sweet idea. She emailed me 2 photographs, both were of beautiful landscapes. The first was of the place they met & the second was the place they celebrated their anniversary. The 2 photos made a great pair of cufflinks & her husband shed a tear of delight when he received them!