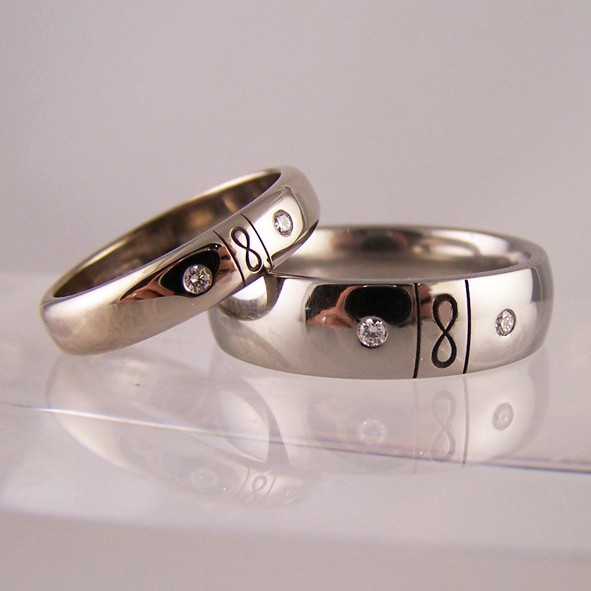 The History of Wedding Rings

Today, it’s hard to find a more powerful symbol of love and devotion than a wedding ring. More than safeguarding vows, wedding rings have the power to bind couples for life. The role of wedding rings in prehistory may be a bit unclear, but things became more romantic starting with the Egyptians.

The Origins of Wedding Rings

Around the 4th millennium BC, the ancient Egyptians exchanged rings made of reeds, hemp, twigs, and other plant stems as a symbol of their eternal love. They believed the ring or circle to be a symbol of infinity and undying love. They also believed that through the ring finger of the left hand passed the Vena amoris or love vein, through which blood flowed directly to the heart. It’s probably due at least in part to this theory that the common practice of wearing wedding rings and engagement rings on the ring finger evolved in the Old World.

It was the Romans who linked weddings rings to marriage. Worn only by wives, wedding rings in Roman times were associated with marital dowry and fidelity. Roman ring-giving customs evolved over the centuries and were integrated into Christianity.

Braided plant rings may have been inexpensive, but they could break or decay in time, which called for more durable materials. Bone, leather, and ivory became materials of choice for wedding rings before metals became popular. Most metal rings were initially made from iron, with gold and silver rings reserved only for the very wealthy.

The Middle Ages and The Renaissance

As materials evolved, so did ring styles. In medieval times, a popular type of wedding ring was the fede ring, whose design brought together two hands clasped in love and faith. Fede rings often featured a romantic engraving.

The Renaissance saw the rise in popularity of poesy rings, which consisted of a silver band in which was inscribed a poem. About the same time, the gimmel ring emerged, a type of wedding ring consisting of two interlocking bands. During the wedding ceremony, the bride and groom each wore one part of the ring. After the ceremony, the wife continued to wear the combined ring.

The practice of only the wife wearing the wedding ring continued into the early 20th century in many countries around the world, including the United States and Canada.

Meanwhile, in Eastern nations, puzzle rings were widely used. These consisted of a wedding ring consisting of multiple interlocking pieces, which brides would have had a hard time putting back together once they took it off. That was intended—puzzle rings were meant to inspire wives never to take their rings off and so to always remain faithful to their husbands.

During the last few centuries, wedding rings have been closely associated with noble metals such as gold, silver, and platinum, which have added to them another layer of symbolism—that of permanence.

During difficult times such as the Second World War, wartime restrictions in England limited the mass and the amount of gold jewellers could use. This led to the creation of simple utility rings that young couples could more easily afford. It was also during the war that many married men sent to the battlefront began to wear a wedding ring as a reminder of their wives waiting for them at home. Humankind had come indeed a long way from their ring-tying in caves. While jewellers added precious stones to wedding rings throughout the centuries, it was only after the Second World War that diamond wedding rings became popular.

Yet despite the many different styles available, wedding rings continue to perform the same essential function. The symbolism with which they are charged makes them a powerful affirmation of love and loyalty.

Guide to choosing the perfect Diamond 10 Reasons for remodelling your jewellery The affordable and eco friendly alternative to natural diamonds What is the difference between 9ct, 18ct, 22ct & 24ct gold? How to design the perfect engagement or wedding ring.
facebook twitter youtube