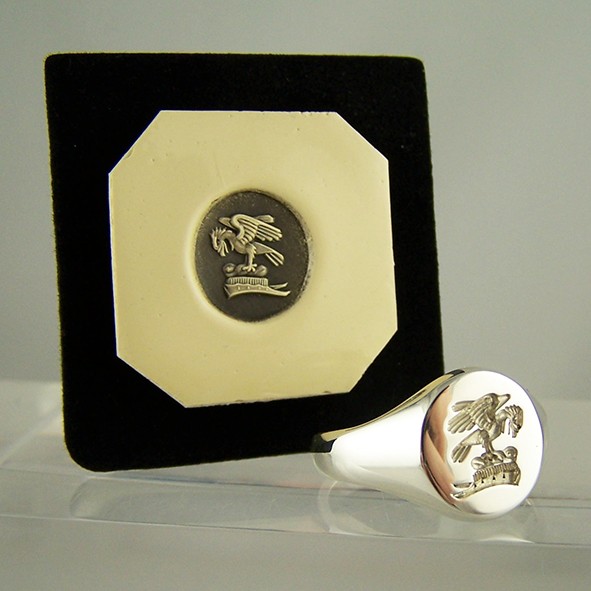 The History of Signet Rings

From antiquity up until the 19th century, signet rings were used by people of social standing to sign documents. In many families, signet rings are heirlooms that have been passed down generations. They are charged with symbolism even if they no longer carry the legal significance they once had.

Signet rings have likely evolved out of the cylindrical seals used by the ancient Mesopotamians as marks of authenticity and distinction in around 3500 BC. But it was the ancient Egyptians that gave signet rings the recognizable form they have today, attaching seals to rings both for convenience and as a mark of individual authority.

Ivory and soft stones were some of the earliest materials used for these types of rings. But it wasn’t until the bronze age that metal signets became popular. After that, signet rings were generally made of gold and featured carved gemstones. For most of history, signet rings were used as signatures are used today. While the first known autograph dates back to a 5100-year-old clay tablet, it wasn’t until the 17th century that signatures became widely used in contracts and other documents. Until then, signet rings bore the owner’s seal, fulfilling a practical role in everyday life.

During the Middle Ages, the availability of sealing wax led to the development of intaglio signet rings, which featured a sunken carving that could easily leave an impression in wax. At that time, it would have been hard to find a person of authority—be it an aristocrat or member of the clergy—who did not own a distinct signet ring. No wonder then that signet rings left an indelible mark on many official documents, and kings such as Edward II of England decreeing that all official documents must bear the king’s seal—the one on his signet.

Signet Rings Through the Ages

Throughout history, signet rings have featured an engraved hardstone that could be used as a unique seal. The hardstone could depict a symbol associated with the wearer, his family, or his business, such as a monogram, a coat of arms, or a family seal. While many signet rings featured a family crest, they also included an individual mark that identified the bearer of the ring. Signet rings are special because most of them are unique—they have been created for a specific individual, and usually, they lost their legal power after the individual’s death. Signet rings have been traditionally worn by men on their ring finger or small finger, but important women have been wearing them as well, beginning with the powerful queens of ancient Egypt.

During the Renaissance and the Age of Enlightenment, signet rings became more widely available among merchants and other rich members of society. As time went by, signet rings were embellished with precious and semi-precious stones. In many wealthy families, the signet ring became an heirloom that the father was likely to pass on to his heir, who added his own distinct elements to it.

In the 18th century, popular signet ring stones included ruby, garnet, amethyst, bloodstone, and chalcedony. The late 19th century saw the rise in popularity of platinum signet rings. By the 19th century, the use of signet rings as legal marks began to wane, but they remained popular as fashionable items and symbols of one’s status in society.

In the 21st century, signet rings are worn by both men and women, who enjoy them as fashionable items of jewellery as well as expressions of their individuality. Signatures may have replaced signet rings as proof of legal authenticity, but many people around the world continue to wear signet rings during weddings, important ceremonies, or in everyday life as a mark of their social standing or purely as fashion items. There are many types of signets available today, ranging from the plain and simple to the extravagant. Finding a fashionable signet ring has never been easier.

If you would like to take a look at some of our other signet rings, or contact about designing & making one for you click here: Signet rings from RING jewellers.