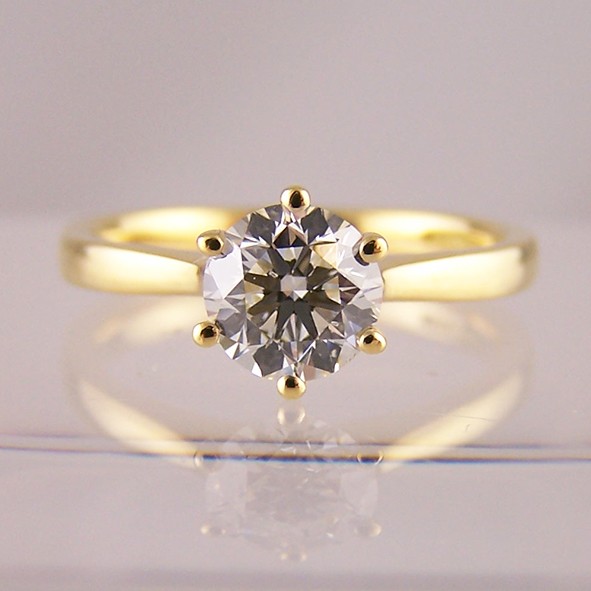 The History of Engagement Rings

Engagement rings transcend their material worth. They are among the most precious items that jewellers create, their sentimental value impossible to measure. But they were not always made from precious materials or worn like they are today. Let’s trace the history of engagement rings back in time to see how they evolved over the centuries.

The Origins of Engagement Rings

The engagement ring is likely to have first appeared in Ancient Egypt and then been adopted by the Greeks. But its history can be more accurately traced to the ancient Romans. Documentary evidence shows that by the early 2nd century BC, public officials in Rome gave their brides-to-be not one but two rings.

The first, a gold ring, was to be worn in public. The second, commonly made from iron, was for home wear. In earlier times, Roman engagement rings were made from iron, leather, ivory, and other durable materials—but not from gold. In fact, it wasn’t until the reign of the emperor Justinian (482-565 BC) that all Roman citizens, regardless of their social standing, could wear gold rings in public.

The practice of giving an engagement ring to a loved woman as a declaration of love most likely evolved out of the old custom of Roman women wearing rings attached to their keys, as a token of love and obedience. The first engagement rings then were carried on keyrings rather than worn on the finger.

The Visigothic Code, which in the 7th century superseded Roman law, associated an engagement ring with a solemn pledge. Once accepted, a ring was considered binding for both parties even in the absence of a written agreement of betrothal. In other words, giving a woman an engagement ring was a serious commitment.

In the 9th century, Pope Nicholas officially declared that an engagement ring signified a man’s intent to marry, further cementing a custom which by then was widespread in the Western Roman Empire.

Diamond engagement rings have been used at least as early as 1477, when the Archduke Maximilian of Austria was betrothed to Mary, Duchess of Burgundy. Although diamonds at the time were not widely available, this royal engagement sparked an interest in diamond engagement rings, which became the preferred choice for many wealthy aristocrats.

The 18th century saw the wide use of gimmel rings, which consisted of two or more hoops that fitted together. Gimmel rings were used for engagements and weddings alike, proving a versatile choice for many couples.

Posie rings, on the other hand, tended to be a more romantic choice, indicating affection but without a formal expression of love. Posie rings bore a romantic inscription and were considered an informal type of engagement ring—meaningful but not binding.

The Victorians had a fondness for ornate engagement rings crafted in a variety of styles and mixing precious metals with gemstones and enamels. Today, Victorian engagement rings remain popular among those in search of special vintage rings.

Engagement rings with a diamond setting declined in popularity during the Great Depression, while simple engagement bands, often containing no stone, remained a steady choice in the years before the Second World War. After the war, however, diamond rings became extremely popular.

In Anglo-Saxon countries, only women wear an engagement ring, though this custom has been challenged in recent years. In other countries, notably Argentina, grooms wear a plain silver band, which they then either replace with a wedding ring or else continue to wear as a wedding band after the marriage ceremony.

Most brides choose to solder their engagement and wedding rings together after the wedding and continue to wear both for the rest of their lives.

Engagement rings are a powerful declaration of love and carry with them the promise of a shared future. In many cases, they are also the last main step before marriage.

Available in many styles, engagement rings today use traditional materials as well as unconventional ones. With so many options to choose from, there’s never been a better time in history to shop for an engagement ring.