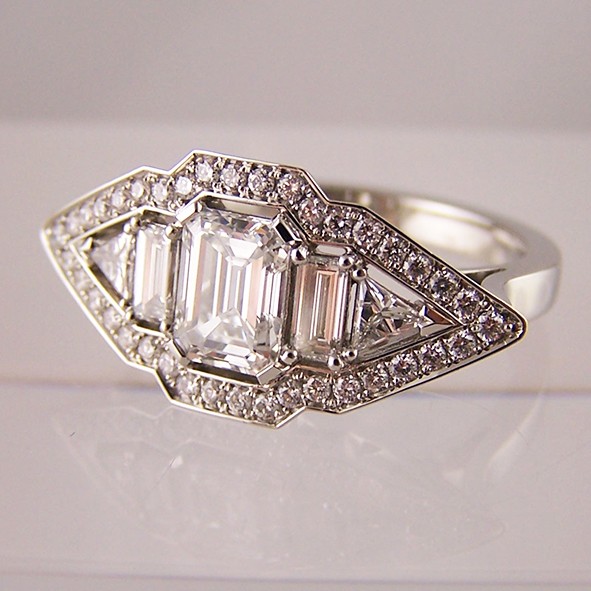 Tweet
You met, you dated, you fell in love. If you’re like millions of couples across the world, the next step is to buy a diamond ring and “pop the big question,” right? Speaking of questions, have you ever stopped to think how diamond rings became synonymous with getting engaged?

When thinking of popping the big question, a few others may come to mind. Why do we buy rings in the first place? Does it have to be a diamond? Luckily, these are all perfectly normal questions to ponder when you’re looking to buy such an important piece of jewellery.
Why Rings?
Rings can be traced back to several ancient cultures, but perhaps none as symbolic as the Egyptians. Egyptians believed circles symbolized eternity; thus, wearing a ring (circle) on your left ring finger represented an unending bond. Of course, the meaning has shifted throughout centuries. Ancient Romans believed in having two rings; one you wear when you are in public, and one you wear at home while tending to children and housework.
Over the course of the next several hundred years, the concept of wearing rings for either engagement or marriage began to take hold. Several religions and civilizations developed their own marriage traditions and several included a ring either given before or after marriage. Today, in most countries across the globe, the diamond ring worn on the left ring finger is a symbol of unending love and the bond of matrimony.

Why Diamonds?
The idea of setting a gem in a ring is a relatively new concept, at least when compared to ancient civilizations. The first diamond ring that was ever documented as an engagement ring was given by Archduke Maximilian in 1477. The practice caught on, and for a time diamond engagement rings were seen as the right of the upper class, namely nobility. Traditions changed over time to more closely resemble what we’re used to today.
Diamond Rings In Western Culture
The reason diamonds are incredibly popular today is due to the DeBeer’s Mining Corporation and their brilliant ad agency N.W. Ayer. Partnering with N.W. Ayers, an ad campaign had begun circulating all over the United States stating: “A Diamond is Forever.” You may have seen or heard this ad campaign as it is still in use today and remains one of the most successful consumer ad campaigns in history.
During the Great Depression of the 1930s the economic climate meant that engagement rings were slightly declining in popularity. The De Beers “A Diamond is Forever” campaign almost singlehandedly reintroduced diamond engagement rings to the country and the rest, as they say, is history.  Diamond engagement rings began to increase in popularity and the widespread practice continued.
The most common practice is for a partner to gift his/her fiancé with a diamond ring as part of the proposal. In more recent years men’s engagement rings have also become very popular. Men’s engagement rings are usually very similar to wedding rings in appearance. Then, when the couple get married, the man can either buy a second narrow ring to stack alongside it, or add a detail to his engagement ring like an engraving or a small, flush set diamond.