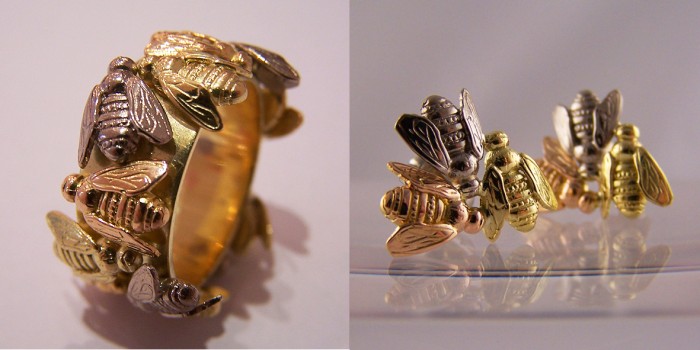 The thing I love most about my job as a jewellery designer is how varied it is. I get to meet different people every day & along with each person comes a new story. Often these stories become an integral part of the jewellery design process. At RING jewellers customers are not limited by choosing an item from a catalogue so they can literally choose anything as their inspiration. Here are the stories of a few of our more unusual commissions…..

We once had a client who had a passion for ancient Egypt. In Egyptology bees were associated with royalty. After the unification of upper & lower Egypt the word 'bee' was even incorporated to the throne name of the Pharaohs. Such was her passion she wanted a gold ring designed & made that would appear to be covered in bees! We gave a design to our wax carver who created a tiny bee. From this 'master' pattern we made a mould & created a little swarm of 18ct yellow, white & rose gold bees. Our customer was so happy she returned to commission the matching gold ear studs!

Not such a long time ago in a galaxy far, far away (Brighton)…..

Now I am a self confessed Star Wars geek but a recent customer put even me to shame. He informed me that Star Wars has it's own alphabet called 'Aurebesh'. This was news to me & after a bit of research (on where else but 'Wookieepedia') I found that this was not only true but it looked very cool! My customer & I designed a wedding ring that featured he & his fiancé's names & wedding date in Aurebesh. The names & date were laser engraved & anodised on to titanium rings. For the finishing touch my customer brought in an old R2-D2 peppermint tin which I lined with foam to make the perfect ring box for his shiny new titanium wedding ring!

There is a nickname that could be described as 'a bit sexist' to say the least. It comes from the heavy ball & chain that was secured to a prisoner's ankle to stop him escaping. {C}Due to it's historical use to hold back & restrict the wearer the phrase "The old ball & chain" has now become a phrase to mean "The wife" (don't shoot the messenger, I didn't think of this). A customer of ours thought it would be most amusing to have a ball & chain laser engraved on to his wedding ring. What was very brave though was he had it engraved on to the outside of the palladium ring! You will be pleased to know his fiancé was present at the time & she was a real sport & agreed the design.

Another customer of ours was the proud owner of a Lotus Elise sports car. But what happens when you are not driving around in your car, what if you miss it? Well this customer had an idea that meant he could have his car with him where ever he went even if it was on foot! He had the idea that we recreate a miniature version of his car in the form of silver cufflinks. It was our wax carver came to the rescue. We gave him stacks of photos of Lotus Elise sports cars from various angles & he set to work. To carry the theme through instead of plain backs on the cufflinks we created little spoilers to push through the cuff & keep them secure. Despite being very small they were so detailed they even featured the windscreen wiper!

There is a symbol called 'Om' (or sometimes 'Aum') that is found in many religions like; Hinduism, Buddhism & Sikhism among others. Hindus believe that as creation began the divine consciousness took the form of a vibration manifesting as the sound "Om". It was the Om symbol that was the inspiration for this customer's design for an engagement & wedding ring set. Made from platinum & set with princess, round & brilliant cut diamonds the ring was made in 2 parts. The first was the engagement ring & this formed the top part of the Om symbol. The wider, bottom section was the wedding ring & this completed the Om symbol.

A while ago a gentleman came in whose daughter was a keen racer of scrambler motorbikes. On these bikes there are racing numbers on the front near the handlebars. These are known as 'number boards'. His daughter's racing number was 111 & he wanted a gold pendant made in the shape of this number board depicting her own personalised number. Rather than just a simple engraving we got our goldsmith to actually cut the numbers out of 9ct yellow gold sheet & solder them on to the front board shape. The result was more far 3 dimensional than a traditional engraving.

We were contacted by a client who said that the way her & her partner always agreed lead friends & family to say they were "like 2 peas in a pod". She wanted cufflinks for her groom on their wedding day so she commissioned a solid silver pair of…you guessed it – peas in a pod!

Often our female customers find that they have trouble getting a wedding ring to fit around their engagement ring. In these instances we make shaped, fitted wedding ring like the ones pictured here: http://www.ringjewellery.co.uk/fitted-wedding-bands.htm One customer of our liked this idea but she also like the idea of personalising this further. As a wedding should be a joyous occasion she drew inspiration from her favourite childhood nursery rhyme about magpies "one for sorrow". In this rhyme 2 magpies represent joy so we incorporated 2 magpies that formed the shape to fit around her engagement ring.

A young lady came into the shop one day wanting to commission a very personal piece of jewellery. She liked vintage style jewellery & did not want anything too modern. She had the idea of using the birthstones of all of her close family members around a heart to represent her love for them. Her birthstone was ruby & so we sourced a heart shaped ruby for the centre piece. We made the heart from 9ct yellow gold. Then using, a pave & millgrain setting (very popular in Victorian jewellery) we set about surrounding the heart with a birthstone for each of her family. Even her dog got represented with a birthstone!

At RING jewellers we do a lot of jewellery remodelling. This is where a customer brings in an old piece of jewellery that they no longer wear. This could be because it is damaged, or it may be an inherited piece that has sentimental value but is not in the recipient’s style. You can see a few examples here: http://www.ringjewellery.co.uk/jewelleryremodelling.html This commission was a little out of the ordinary though because it wasn’t a piece of jewellery that was being converted. A young lady had been talking to her boyfriend’s family & they mentioned a relative getting a ring made from a belt buckle! Inspired by this story they came up with their own unusual remodelling idea. This was to convert a coronation spoon that had been handed down through the generations. We took the coronation spoon & made a contemporary, grooved gents silver ring. Obviously the spoon was not getting much use but the ring can now be worn every day. I'm guessing this could become family tradition for years to come!

We couldn't resist a bonus 11th commission: Have you cake & eat it…..

At RING jewellers it’s usually us that takes inspiration from beautiful objects & stories but this time we were the inspiration! Good customers of ours who had previously visited us for a blue diamond engagement ring came back to order bespoke wedding rings. We made a ladies shaped band to fit around her crossover engagement ring & we also created a matching gents band. Both of the rings were then set with a baguette cut (rectangular) blue diamond. A feature of the rings was that when they were placed together a raised gold wire detail on each ring joined to make a heart shape. What was unusual about this commission is that the couple were so happy with the design that it became the inspiration for their wedding cake!